Okay, so, it’s Valentine’s Day again.Yeah, yeah, I’m into it. Love, togetherness… cherubs ‘n’ shit. It’s all good in the hood. I’m totally down with sex and romance, and all that fun stuff, but when Jason Sandford from Ashvegas asked me what I might write about for the occasion, I felt a big, giant, overwhelming sense of meh.

“I don’t know,” I said, biting into a Vortex doughnut, “I kinda just wanna write a list of places where people can buy hot dogs and doughnuts.”

He laughed so hard.

His laughter got me laughing too, and before I knew it, the meh cloud over my head was lifted! So, in an effort to fight feelings of Valentine’s Day Meh in the hearts and minds of my fellow Food Fans, here’s my list…

I popped into Woolworth Walk downtown, and asked the bad-ass ladies who work at the classic soda fountain there a few questions. The answers… 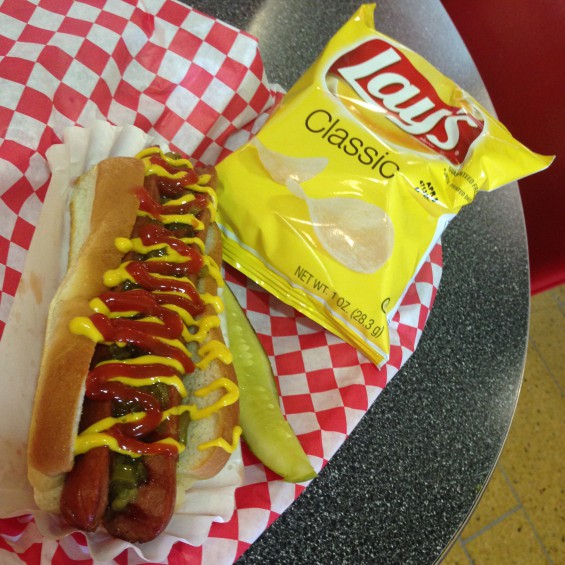 A hot dog, a pickle, and a bag of Lays. There’s a joke in there somewhere… Photo by Stu Helm

When I dropped the crew at Vortex a note through FaceBook, to ask if they were planning anything special for Valentine’s Day, they responded right away.

“Hey!!! Yes! We will have heart shaped doughnuts and we will also have a little ~doughnut personalizing~ station during the day where you can get your doughnut to be customized however you like. All the proceeds from the customization will go towards Ryan Conrad as a fundraiser! AND will have Bundle packages of 1 12oz bag of coffee and 4 box of doughnuts for $20 or 2 doughnuts and 2 coffees for $10!”

I knew those guys would be rocking-out something totally awesome, and they didn’t let me down! I’ll be there, getting a personalized doughnut that says “I HATE EVERYTHING” on it! 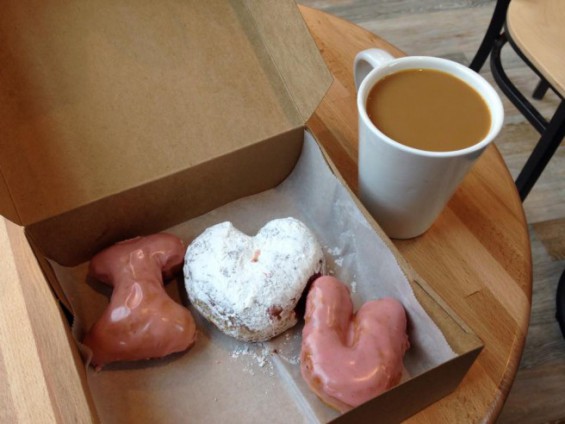 Last year at Vortex they had “I <3 You” Doughnuts. Yes, I ate all three by myself. Photo by Stu Helm

Now, you may have noticed that I’m listing two doughnut shops in a row, and that is because I do not want to suggest in any way that I think hot dogs and doughnuts must always be paired with each other. Sometimes, two doughnuts is the natural choice. Or two hot dogs. Or two hot dogs AND a doughnut. Or five doughnuts, three hot dogs, and a cruller. Some people prefer eclairs exclusively. My point is… This is Asheville, Mang, so do whatever the fuck you want with your hot dogs and your doughnuts and your crullers and your eclairs. I’m just makin’ a list, not prescribing a lifestyle.

Anyhoo, I stopped in to Hole Doughnuts on Haywood Street with my friend Lynn from Buffalo Nickle and I asked Co-Owner Caroline if they were going to be doing anything special on Valentine’s Day. She said YES! But she wasn’t sure what yet. 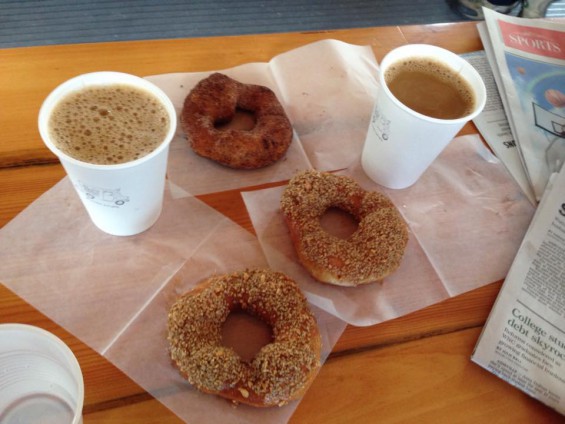 A Ménage à Troi of doughnuts from Hole. Photo by Stu Helm

I wrote to my man, Super-Handsome Jasper at Imperial Life and asked him:

“Are you guys going to be serving one of your amazing hot dogs on Valentine’s day by chance?”

He responded immediately with:

Jasper is a busy guy, so I left it at that.

I personally love the hot dogs at Imperial Life, which change regularly, so I’m sure they’re going to do an awesome one for Valentine’s Day. I might have to pop in. 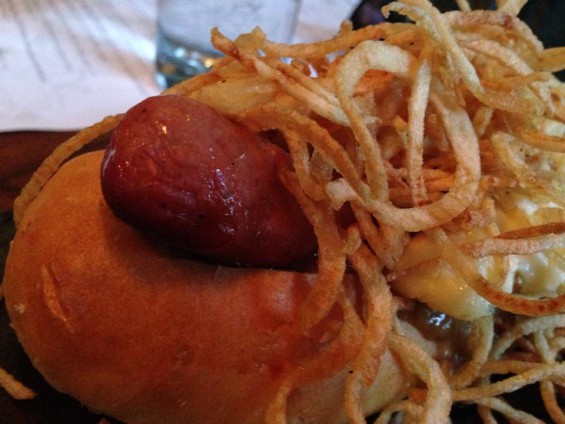 Oh my. What’s that poking out from the short-n-curlies? Why, it’s a Poutine Hot Dog from Imperial Life! Photo by Stu Helm

I ran in to Fred Dehlow, owner/baker of Geraldine’s, while we were both having lunch at Bhramari Brewhouse, and I asked him if he’s making any special doughnuts for Valentine’s Day. He responded that he might do-up some pink frosting, but won’t be making any “crazy flavors.”

He did emphasize to me that he would have some small, two-person cakes available, that he’s making specifically for couples to share on Valentine’s Day.

Now I’m imagining me and Dawn — hands behind our backs — “Lady and The Tramping” a Valentine’s Day cake together. 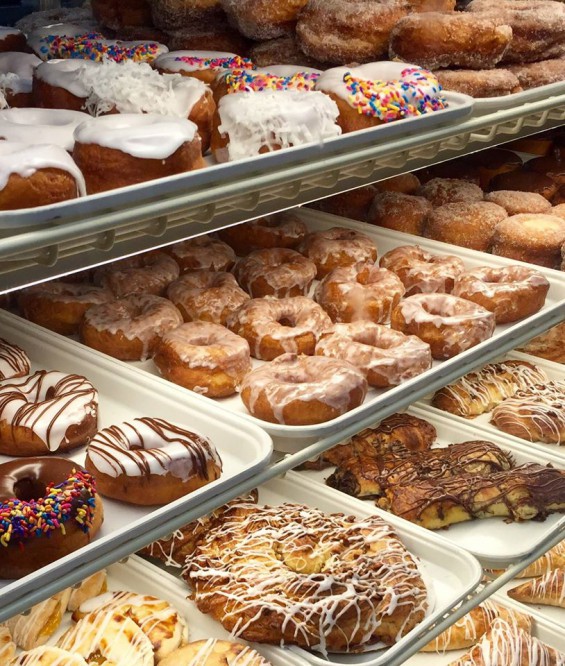 I also dropped an FB message to my friends at The Junction to ask if they would have any kind of sausage or hot dog on the menu. They usually do, and they responded quickly to let me know that…

“Yes, there will be some form of sausage & the ever popular foie gras corn dog on our Valentine’s menu… Should be all kinds of fun! Hope you are well. Stop in and see us soon!“

Awww! That’s so nice! Thanks, The Junction, I’ll be in for brunch if not for your Valentine’s Day sausage! 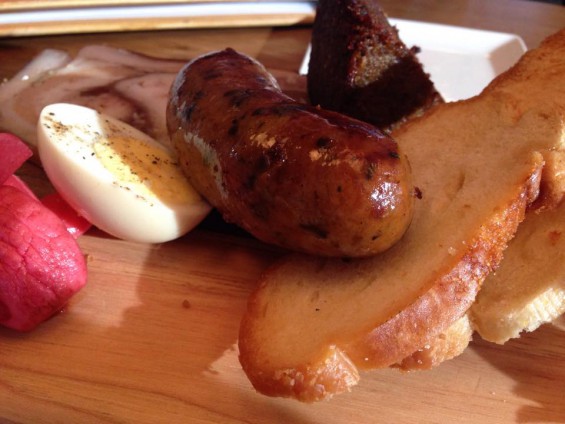 In yo FACE! The Junction’s meat board comes with a whole sausage on it. One of the biggest in town, I might add. Photo by Stu Helm

Finally, I dropped a note to Chef Brian at the brand new Asheville Biscuitry on Merrimon Ave and asked if he had anything special going on doughnut-wise for Valentine’s Day. He had this to say:

“We are going to make some rose/violet type of donuts and cinnamon. Heart shaped yeast doughnuts!” 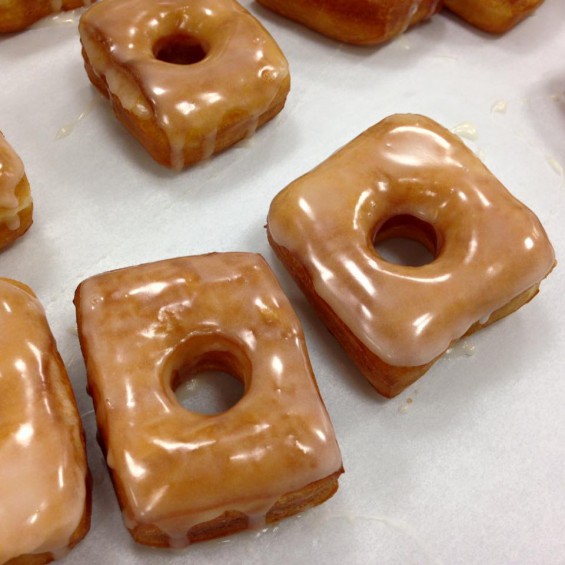 These square doughnuts are from Asheville Biscuitry. On V-Day they will be heart-shaped. If your heart is shaped like a square, you might be SOL that one day. Photo by Stu Helm

And there you have it! My Valentine’s Day Hot Dog / Doughnut Short List for 2016. I know I missed a lot of them, and I didn’t even mention the hot dog carts, so if you have suggestions, please post them below as a comment, or on my FaceBook page.

Enjoy the Holiday on February 14th, Everyone! If you’re lonely on that day, and feeling super-meh, here’s a tip: Go to Imperial Life, order a hot dog, and just as you bite into it… lock eyes with someone… anyone… for twenty seconds… the whole time you’re chewing… until you swallow. I guarantee that something will happen, and I’m guessing that it’s going to be something pretty awesome.

That’s my heart-shaped gift to you, Asheville! 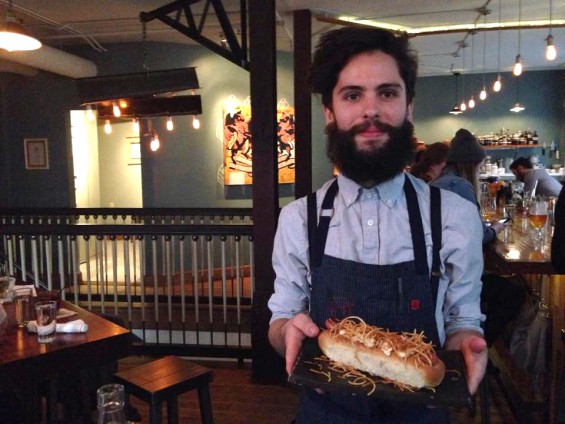 May all of you be visited by the bearded Pan God of exotic hot dogs this Valentine’s Day. Photo by Stu Helm. 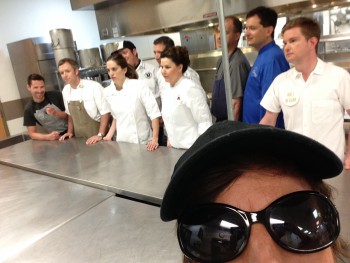 One thought on “HOT DOGS AND DOUGHNUTS”