One of the more sickeningly sweet aspects of Christmas around Food Critic Headquarters is the tradition of the “Christmas Cake.” 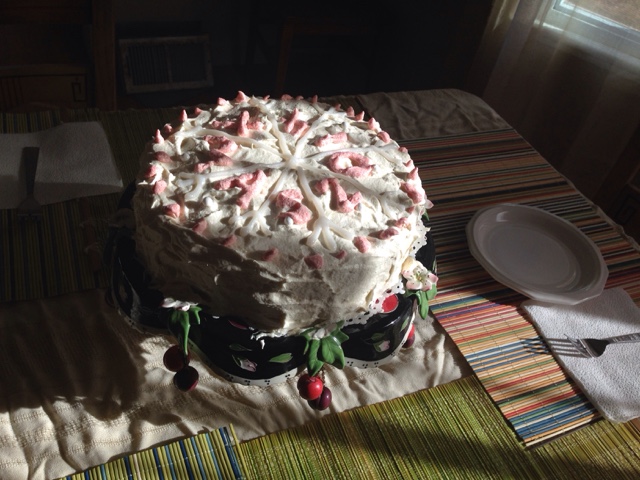 It’s something I started with my family about 6 years ago and we’ve done it every Christmas ever since.

The first year winner/Monarch was my Bro-In-Law, Willy.  We have theee most hilarious pictures of him receiving the tam.  His.  Face.  Was.  Killing me.

In Year two, Dawn won the crown, and the following year it was my my sister’s turn to be the lucky wearer of the tam.  Dawn was thrilled, but my sister’s face was almost equally as hilarious as Willy’s in it’s un-thrilled-ness.  Meanwhile, the nephews were fucking DYING to win.  And me too.  Maybe.  Secretly.  Just a little.
Finally in years four & five my nephew Hanson was a two-time winner, and then last year his older brother Asa took it away from him to claim the tam from December 25th 2013, up until December 25th 2014.
That’s when I got it.
Yeeeah, Man!!!  I got the X-Mas trinket, I received the Fam Tam,  and I am the current, reigning King of Christmas, mother fuckers!!!
Okay, the truth is, the trinket wasn’t actually in my piece of cake, but I invoked an old, somewhat obscure and rarely cited rule, in which a period of trading may be conducted BEFORE prognostication begins.  In past years, if a family member was unhappy with their trinket, they could ask if anyone wanted to trade.  If there were takers, a bargain was struck.  Well…
My step-dad got the special X-Mas trinket in his piece of cake this year, but because of the new, added duties of the King, he was unhappy about it.  Asa was first to invoke the trade rule, but he was shot down as last year’s winner, so that’s when I spoke up, accepted the trade, and just like that, baddah-bing-baddah-boom, allah-kazzam, shamma-lamma-ding-dong, I became the Christmas Monarch.
As Willy put it:  “The rightful king abdicated his throne to his eccentric step-son.”

The “aaand this did not bode well for the Kingdom” was implied.