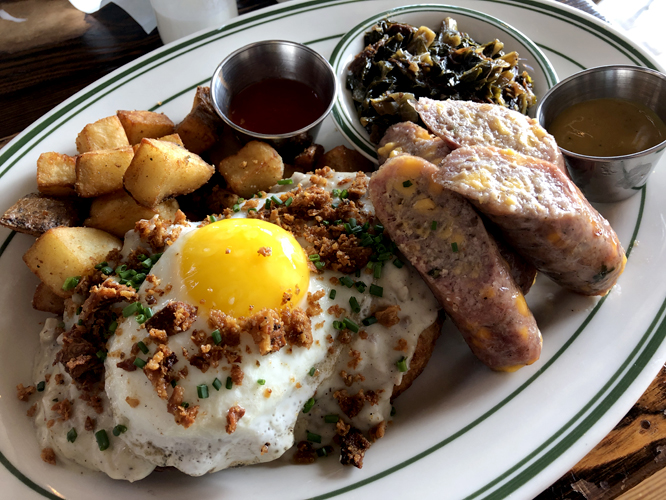 Food so good it brought a tear to my eye, for real. 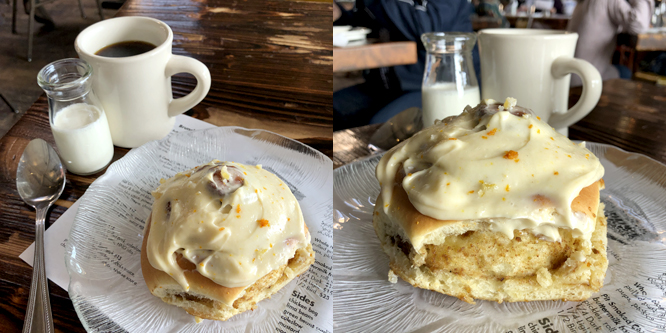 I had looked at the menu posted outside, and I was already figuring on ordering-up some biscuits ‘n’ gravy, when I sat down, but I couldn’t stop thinking about the cinnamon bun. I was having a hard time deciding if I should get one, thinking that would be too much food, and I was hemming and hawing, when POOF the server showed up with the coffee I had ordered, and a cinnamon bun on the house! Problem fucking solved. I ordered the biscuits and gravy, and then…  just kinda looked at the bun.

I was in love already and I hadn’t even taken a bite.

The frosting on this bun was to die for. Fresh, rich, and creamy. The very first thing I did was dip my pinky-finger into it, and give it a taste all on its own. Herly ferk-nerts. Heavenly. Light, mildly sweet, with a slight citrus-y zing to, and what looked like candied lemon peel, and perhaps even orange zest sprinkled on top. Just the shit on top of this bun alone was blowin’ my mind. Also it was pretty to look at, so extra points for that. 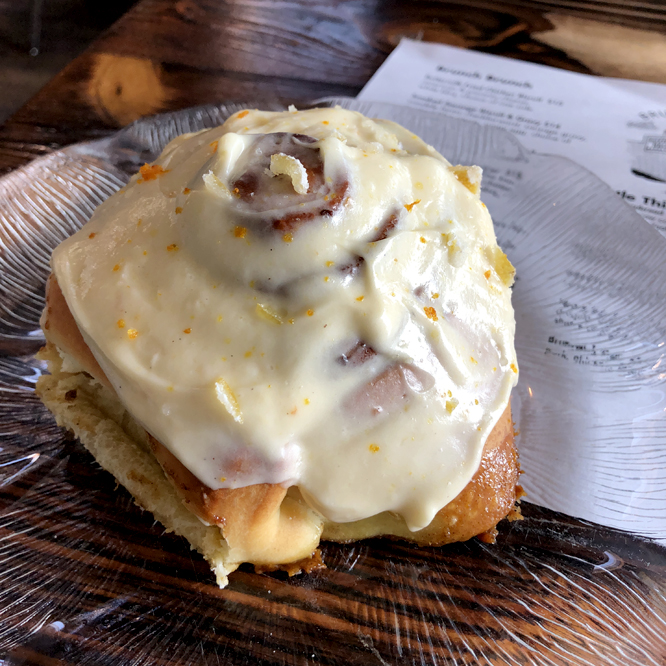 The bun itself was one of the most perfect cinnamon buns ever, in great part because it was allowed to be a BUN. It wasn’t trying to be cake. Or the sweetest sweet thing you ever ate. Cinnamon buns are supposed to be for breakfast (or brunch), and yes, they’re meant to be sweet, but not dessert sweet. This bun was moderately-sweet, with most of the sweetness of this trat coming from the frosting, whereas the bun part had a bread-like quality to it that was hearty and wholesome. Also, this cinnamon bun was just as fresh as it could be, and as always, Buxton’s baked goods are among the best in Asheville!

I was already half-full from half-a-bun when my main dish arrived, and whoa, it was al lot of food! YAY!

Brunch should be a lot of food if you ask me.

On my plate there was fried taters, collard greens, cheddar sausage, a sunny-side egg. and of course, biscuits and gravy. Plus two sauces and a sprinkling of cracklin’s and fresh chive. 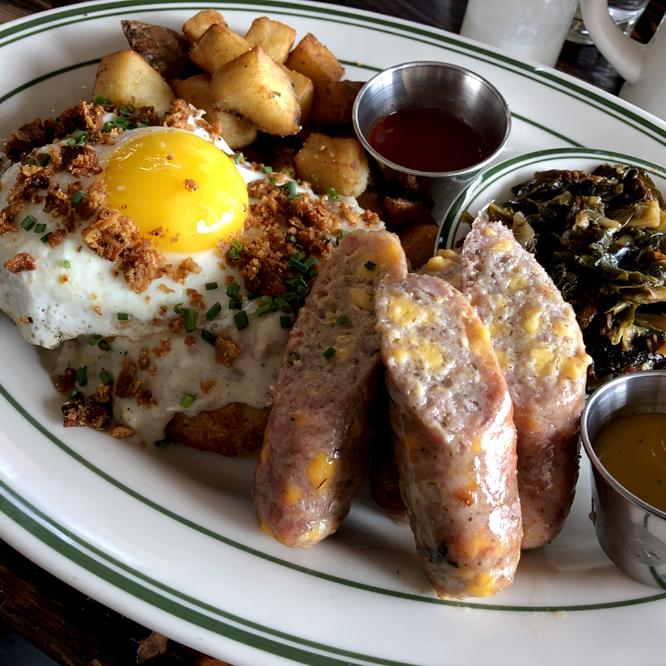 After just a few bites, no joke, I could feel a tear trying to work it’s way out of my left eyeball. WTF? Was this food about to make me cry? Kinda seemed that way. It was sooooo fucking goooood, that, I dunno, I just felt really lucky and grateful in the moment, that I had the privilege to eat this food, so much so that a fucking tear tried to cry its way out of me! I flicked it away with my middle finger, gathered myself, and continued eat this gorgeous pile of local, scratch-made goodness until i just couldn’t fit any more in me. 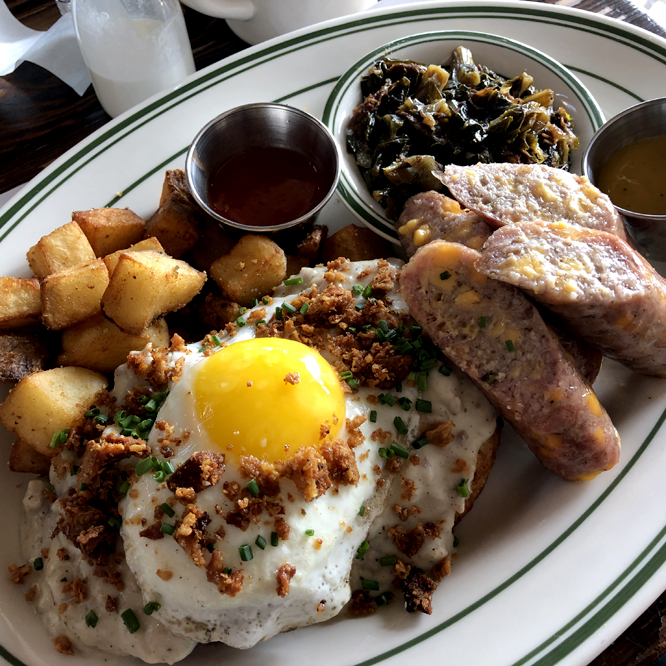 Everything on the plate was fantastically good, the Cheddar Sausage from Vandele Farms was a highlight, the collards are always tangy, spicy, slightly sweet, and cooked just right with chewy bits of pork int he mix, the taters were crispy on the outside and piping hot on the inside, and the little bit o’ cracklin’s sprinkled on top of the local egg were the absolutely coup d’-mutherfuckin’-grace of flavor and texture if you ask me, adding exactly the right amount of crunch and an extra layer of Southern goodness that just straight-up, literally, makes me want to shed real tears of unbridled eater happiness.

Don’t worry, I did bridle that shit in, and I did not openly weep in the middle of a restaurant full of people. I quietly consumed about half of what you see in the pictures above, I was STUFFED, so took the rest home to enjoy later. It reheated very nicely.

The dining room was packed, BTW, so go to Sunday Brunch with that in mind, and also be aware that the fare offered on the menu, including the pastries, changes from week-to-week, so the items I’ve reviewed here may or may not be available when you go in, but all the flavors, and all the feels, will be.

Get brunch at Buxto’s. There may or may not be crying.

One thought on “Crying Over My Brunch at Buxton Hall Barbecue”