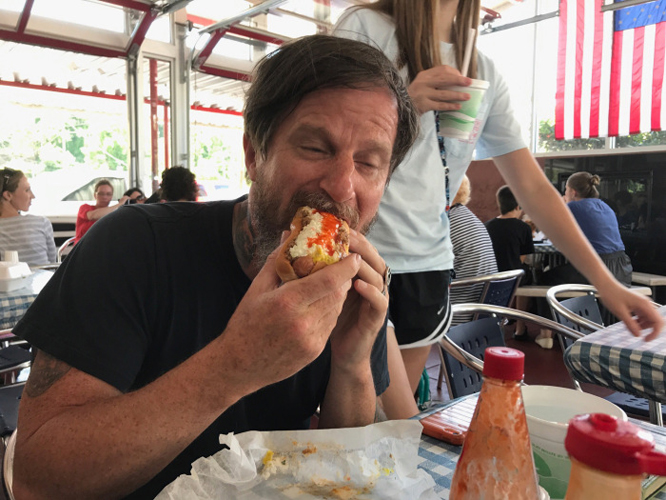 “Over the last several years, food writer Stu Helm has become an influential voice in Asheville’s bustling restaurant scene. With an almost unparalleled passion for local restaurants, he eats out A LOT and then uses social media to discuss his favorite dishes or deliver a shout-out to beloved chefs. He never wavers from a signature look, black jeans and T-shirt (or a hoodie, when it’s cold) and black Converse shoes, making him easy to spot on the streets of downtown Asheville, usually on his way to or from a restaurant.

While Helm has no formal background in professional kitchens (a fact he does not hesitate to admit), he stays on top of every restaurant opening, tracks the movement of local chefs and can quickly identify trends, as well as tastes and flavors that he likes. But don’t call him a “foodie or a “restaurant critic.” He eschews both titles. Instead, he prefers the term “eater” and “food fan,” a distinction that allows him to avoid the pitfalls into which many “critics” often fall.

Helm has a following on Facebook, but also writes for blogs and local news sites like AshVegas.com, serves as a guide for Asheville Food Tours, has hosted a radio show and podcast, and launched a series of popular food festivals and contests that draw thousands.”

People tend to ask me the same questions, so here are some answers, just in case you were also wondering…

For some reason it’s always 300 pounds.

I don’t really have one answer for this question. While I do eat a lot of high calorie / high fat foods, I generally only eat one large meal a day. Also, I don’t eat a ton of highly processed foods, corporate foods, or high fructose corn syrup. And, not for nothin’ I walk a lot. I walk to work, I walk for work, then I walk home from work. On my days off, I walk to the cafe, I walk to lunch, I walk to dinner. I walk walk walk walk walk. And I walk fast, and Asheville has a fuck-load of hills. Ain’t no joke, haulin’ ass up The South Slope to Pack Square! In the blazin’ hot sun? Ho-o-o-ly shit, Gurl. I be droppin’ mad calories like Skrillex droppin’ beats. Only not nearly as annoying.

I do exercise a li’l bit too, mostly push-ups and pull-ups, because one thing about calories is, if you do even the slightest amount of strength exercise while consuming massive quantities of them, they get immediately converted into muscle tissue. I don’t know that for an actual fact, or even at all, but it’s what I tell myself, so if you know any differently, shhhhhhhh…. don’t tell me! Mind over matter might be at play here. Don’t ruin it!

Also, people often speculate that I must have “good genes,” and while my Dad was as thin as a pin and seemed to eat whatever he wanted, he also had open heart surgery, as did his father before him, so we’ll see just how “good” these genes turn out to be in the end.

Anyhoo, I’m 5′ 4″ and I generally weigh somewhere between 125 – 135 pounds at all times. I’m probably always going to weigh about that amount, as long as I stay active, and don’t start eating whole pints of ice cream every night before bed. Which is absolutely within the realm of possibility.

Q: DO THE RESTAURANTS KNOW WHO I AM? OR AM I ANONYMOUS?

First off, the idea that food writers are “anonymous” is a little old fashioned. Errbody knows errbody else in the food world. And some food bloggers will straight-up call a restaurant ahead of time to tell them — not ask, but tell them — “hey, I’m coming in, with guests, so y’know essentially, style me out for free because I have X number of Insta fans etc etc.” I’m not one of those. I show up unannounced 95% of the time, because I’m just going out to eat like a normal person. Grabbing a bite with my mom spontaneously, on a lunch junket with my boss Paddy, meeting Dawn for dinner after a tour. Sometimes while out dining with friends, family and colleagues, depending on the venue and the staff on deck, the people working will absolutely know who I am, and sometimes they will have no fucking clue.

I do make reservations occasionally, also very much like a normal human being, and yes I do make them under my actual name, because it would be super-weird if I didn’t, and then I showed-up and everyone was like, “That’s not Paul McCartney, that’s Stu fuckin’ Helm.” And yes, again when I make a reservation, some people might know my name from my reputation, or just because I’ve lived in the same relatively small town for 14 years in a row, but other times, there will not be one single staff member in the house who has any idea who I am or that I’m a food writer. I’ve been going to one local bakery for years, seeing the same staff for all that time, and not long ago one of them asked, “Are you a food writer or something?”

Q: ARE THE RESTAURANTS AFRAID OF ME? DO THEY FREAK OUT WHEN I WALK IN THE DOOR?

Nope. Not afraid. Don’t freak out.

You know who they do fear? YOU! The general public is the biggest X-factor out there, in terms of potentially business-harming Yelp reviews and such. The restaurants that know me, know that I’m going to give them a fair shake, allow them an off day, a clunky dish, or a misstep in service on occasion, and the ones who don’t know me treat me like every other schlub who walks in the door.

There was one case when a pastry chef kept “messing up” my dessert and having to do it over again, because my server told them “it’s for a food writer.” I laughed and asked the server, “Did you tell them it’s just Stu Helm?” I’m sure they would have settled the fuck down had they known it was just me.

The only time the restaurants might “freak out” is when I walk in to one of my food tour partners unexpectedly, just to eat lunch, and they’re like, “Oh my god! Are you with a tour?!? I didn’t get the text! How many of you are there? Are there any Vegans?!?” And I’m like, “Shhhhh… it’s oakyyyyyy… you’re gonna be fine… I’m just here for a taco.”

I have spent more money on local food in Asheville, NC than just about any other person in the entire population, and I would be willing to bet actual money on that, which I would then turn around and spend on food.

I do enjoy some “workers” and “neighborhood” discounts that other people who live and work downtown might also receive.

Also, as a writer, I don’t make a ton of money, which the restaurants are aware of, so I do get invitations to special dinners and such, and those tickets are usually comped. They know I will  take pictures of the food at the very least, and perhaps give them a write-up, or even a “Best of Asheville” Food Fan Award at the end of the year. It is mutually beneficial for food makers to give food bloggers, writers, and photographers access to their food.

My readers know that I’m not going to blow-up something that I didn’t like just because I didn’t pay for it, and so do the restaurants, so I feel perfectly okay taking the amount of free food that I do get, and paying for the amount that I pay for.

Fun Fact: If a restaurant gives me too much free food, it makes me feel weird, and I might actually go less frequently, just so they don’t think it’s the only reason I come!

I do get to eat for “free” with Asheville Food Tours, but that’s actually part of my job. For real. I have to eat the food on the food tours, because how the fuck else am I gonna know that my tour was an enjoyable experience for my patrons if I don’t eat the same food they eat? Essentially, a free meal per “shift” is  part of my pay, which is not out of the ordinary in the food and beverage industry.

I also get to eat for “free” when I judge food competitions, but that’s a whoooole different story. You simply do not feel good after tasting 22 different chicken wings, or 15 sliders, or 30 slices of pizza, or 11 pieces of pie. You think you’re gonna love judging doughnuts, because you love doughnuts, but then you soon realize that you don’t usually eat a full dozen doughnuts, or even six, or two, in one sitting. So, yeah, food judging is a whole different animal. A very large animal. That you ate.

Q: DO I COOK AT HOME? AM I A GOOD COOK? HAVE I EVER WORKED IN A PROFESSIONAL KITCHEN OR AT A RESTAURANT?

Yes. Yes. And yes, a little bit, kinda sorta, but not really.

I love to cook, and I’m pretty good at it according to friends and family. I especially love cooking surf and turf, and mostly stick within the genre of standard American and European fare.

I have worked in a professional kitchen only once, and only for a brief time, serving my “Punk Rock Hot Dogs” to the public at the old Clingman Cafe in the River Arts District of Asheville after hours one Summer.

I did work as a bartender for two seconds at a pizza place in Boston in my 20’s, but I hated it because it involved either talking to people or watching sports on TV, two things I was never in a mood for back then.

And that’s the extent of my culinary experience. It’s not a lot, but you don’t need to be a great artist to appreciate great art, or a construction worker to know a good wall when you see one, and you certainly don’t need to be a chef or professional hospitality provider to take a picture of a cheeseburger and write “#yerm” on Instagram. Nomesayin’?

Q: WHY DON’T I DRINK ALCOHOL?

Because I was a heavy drinker for 30 years, and finally decided to give it up for good. If you would like to give up drinking or other addictions, please get the support you need to do so. Quitting drinking changed my life in very positive ways.

And there ya go. I hope you found these answers helpful, informative, and entertaining. if you have any other Q’s that you wanna FA, please do so in the comments section below.