“Ho-o-oly shiiiiit. I came downtown to eat and buy my nephew a birthday gift but my hatred of all humanity has effectively overridden my ability to achieve either of those tasks. Between the car fumes, the day-drunks, the lines at every restaurant, and several of the ugliest pairs of shoes I’ve ever seen in my fucking life, I just can’t take it anymore. I say that I love the tourists, but the truth is I mostly love them from afar. Up close, especially on an empty stomach, I… I just can’t… I can’t do it. They win. I’m heading back home, SOL on all counts. Downtown is theirs today. Not mine.”

“I truly don’t begrudge the tourists their day in Asheville. I get to live in this beautiful city 365, and I’m happy to share it with the folks who come to visit for the weekend. Can you tell that I finally ate something? (smile emoticon) My rage state abated after the first several life-saving bites of day-old pizza from Fresh Wood Fired Pizza and Pasta. Holy shit, though. I gotta remember to avoid downtown most weekends!”

What a difference a few bites of stale pizza can make. Both of my posts from FaceBook above are sincere, the first expressed in a hangry state of mind, the second posted moments after shoving food in my face. While that phenom is mildly interesting, what’s more interesting to me is the conversation my original hangry post touched off among my fellow food fans. Like most “tourist cities,” Asheville has a complex and complicated relationship with the people who come to visit. Here are some of the comments left under my post…

Helen H – “I did the same yesterday, it was unbelievable, people coming at you from every direction on the south slope.”

Riva D – “Hardly go downtown until winter. Come over to WAVL. Not quite as bad as DT.”

Calandra P – “Sooooooo many tourists now in Asheville! It’s like Disney Land without the rides. Ugh”

MCS – “This was the wicked weed, 30 minutes before it opened!” 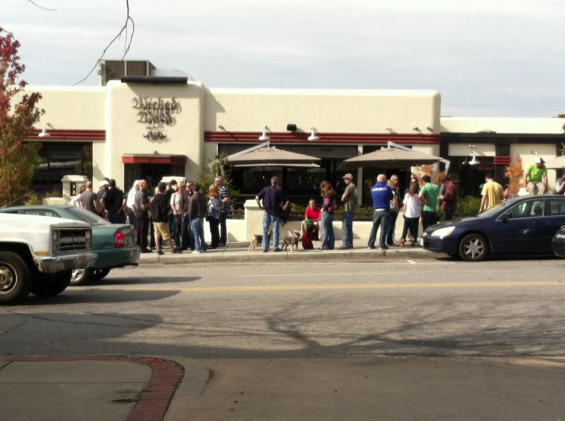 Whoa. People are lined-the-fuck-UP for beer at 11am in Downtown Asheville. Hey-hey, Drunky Town! – Photo by MC Schwartz

One of the dilemmas of Asheville’s booming economy, in my opinion, is that much of it is based on and around the mass consumption of alcohol. I’m well known among my friends for my opinion that there is a very thin line between Beer City, USA and Drunky Town. A few weeks ago a drunk guy slammed his hand on my table as I ate outside at Bomba., and decided to be my confused, inebriated frienemy, alternatively insulting and threatening me, then extending his hand with apologies and toothless smiles. I had to tell him in no uncertain terms to “get the fuck away from me right now,” before he removed his besotted self from my presence, and joined the other drunken people in various states of consciousness on the sidewalk in Pack Square.

Earlier on, a drunken dude-bro told me that my bike was “sexy.”

Okay, so that last one was kinda funny, and I did say, “Thanks!” but the first two anecdotes are just small samples of what a downtown full of drunk people can be like at times: Annoying as fuck!

The other major annoying thing about the New Asheville is the number of fucking cars everywhere at all times, and the more there are, the slower they go, until eventually they become solid columns of giant, poison-gas-emitted machines — each containing a tiny human or two —  lined-up for blocks, or even miles, shitting out their noxious fumes, all of which kinda sorta has an effect on how much one can enjoy the “fresh mountain air” that the CVB and other tourism boosters extol about our fair city. I have to admit that before I even got to the madness of the zombie hoard occupying the middle of Downtown, I was super annoyed by the number of cancer-giving death pods I had to walk past along the way. I tweeted about it, and got one super ass-hatty response which I responded to in the only way I know how. 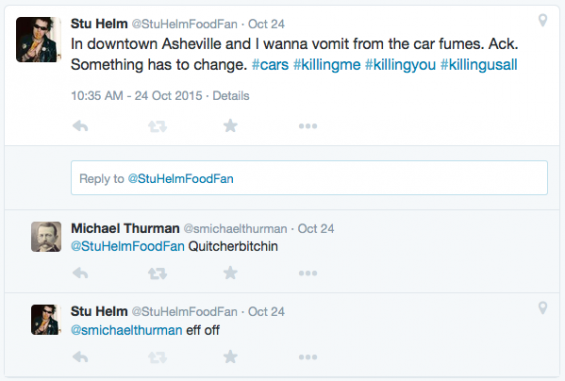 Aaanyhoo, a few of the fans had more positive thoughts about the downtown crush that I experienced on Saturday, like James F who wrote:

“[we] had a great time at a birthday party, Lafeyette/Bouchon courtyard. Walked in and out, nice fall color on the trees… it was a private party, though, so no tourists there. Still, nice afternoon downtown I the heart of leaf season, so it can be done!”

No doubt it can be done, good friend James! Thank you for shedding some much-needed light on my mood that day.

Autumn Bomb from Mojo Kitchen also popped-up to remind me that, at least for the time being, her establishment is still one of those “locals-in-the-know spots,” where a guy like me can eat a taco in peace, even while a sea of tourists churns outside. She wrote:

“[Mojo] had a large group [of tourists] come in and ask if we had anything like hotdogs…‘you know, something cheap.’ But most of the customers we did have were regulars and knew exactly what they wanted when they came in. I love that.”

Mojo Kitchen on College Street actually has some of THEE most bumpin’ food in Downtown, Asheville, and I used to always say that it’s the perfect place for people who enjoy eating alone in the dark, so I totes should have gone! Arrrrg! Fail on my part.

Mojo Kitchen and Lounge is one of the few remaining hidden gems in downtown Asheville!

In my rage state, I simply walked home like a broken robot, sparks shooting out of my head-unit, angry beeps and buzzing sounds emitting from the down-turned slit in my face-plate, as I thumb-typed my FaceBook revenge against all humans.

“This is one tourist /wanna be resident, that just loves you. Some people are jerks and ruin it for the rest of us.”

You know what, Beth, I love you too, and I actually do love the tourists. I’m the jerk. And a grump, and I just get super-pissy when a family of 15 from East Doodooburg, Indiana is standing between me and my kale pakora-ra-ra… RRRAAAAAGE STAAAAATE!!! 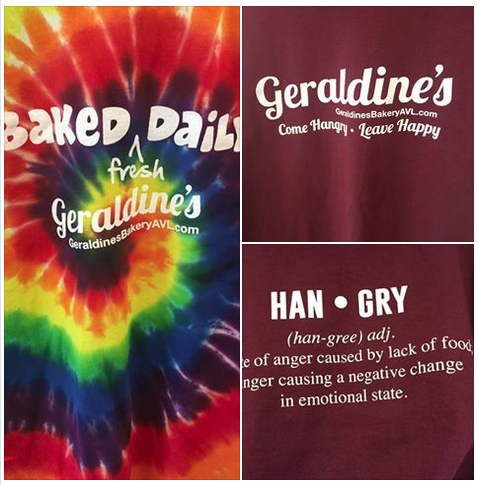 My friend Fred from Geraldine’s Bakery also reminded me that his establishment is one place, where you can “Come Hangry, Leave Happy,” just like it says on one of the shirts we designed together! Thanks, Fred!