I recently decided to go back to school. Coffee School! I started by attending a “cupping” last Friday, and now I’ve signed myself up for a class in November! Ah, yes, it’s the life of a student for me again! Hitting the books, smoking grass, playing quarters, dropping out… Uhhh… Yeah, true story: I’m a college drop-out. FOR SHAME, STU HELM! But, hold on now! I went back to college in my late 20’s and got me a diploma, so now I’m both a drop-out AND a graduate, with a Bachelor’s degree in Fine Art to prove it. Woo hoo!

Education is a wonderful thing, and despite what folks might believe about Art school, my BFA has been super-useful over the years, and I really don’t think I could have become a working artist without it. Before I had my degree, I worked a variety of “shit jobs,” as we called them before some idiot in the 90’s came up with the term “McJob.” I never worked in a fast food joint, instead doing my time in offices, record stores, grocery stores, a warehouse, an ice cream factory, a pottery shop, a pizza bar, a library, a plant-watering service, and Harvard Medical School (I shit you not), aaand of course I put in my obligatory hours at a local cafe working as a barista. Well, when I first started we didn’t call ourselves “baristas.” That wasn’t a thing yet. For me that term came around a little later, when Starbucks bought the cafe I worked in, and required us to take something called a “barista exam,” so that we could become “certified.” Whatever. I took the exam, got my certification, and promptly quit. Fuck working for Starbucks. They wanted me to stop dressing like a slovenly punk. JERKS!

Anyhoo, cut to 200 years later, it’s 2015, and I’m suddenly interested in getting “re-certified” as a barista, just because I think it would be fun to learn that stuff all over again, and y’know what? I might actually enjoy picking up a shift or two at a nice cafe, just to get me out of the house if nothing else.  Writing is lonely business.

I asked my friend Bill Tanner, one of the co-owners and Master Roasters at PennyCup Coffee Co. if I could do, like, an unpaid apprenticeship type of thing at his cafe, and while he was not opposed to that idea, he suggested I look into attending classes at Counter Culture. Thanks, Bill, you’re a fucking genius!

Counter Culture coffee company has an education center right on Broadway Ave in downtown Asheville. It’s true! They teach people stuff about coffee there, and every Friday morning at 10am, the public is welcome to join the wonderful CC staff for their “Tasting @ Ten,” which involves a specific practice, also known as a “cupping.” I’d heard about these cuppings at Counter Culture before, as well as other cuppings happening around town at some of the fancier cafes, but I had never attended one. In fact. I found the word ‘cupping” to be so off-putting that I defaulted to my usual, “fuck that” mode about them. It didn’t help that one of the first people to ever invite me to a cupping was Jared from Waking Life, and even before I knew what we all know now about Jared from Waking Life, it gave me the creeps. I couldn’t help but think that a “cupping” with Jared from Waking Life might involve the palm of his hand making contact with the underside of my nut sack. Ew. Also, the whole thing sounded pretentious as fuck to me. Not so at Counter Culture!

I walked in, met Lindsay Lee, the director of education, and she was super-friendly. There was one other coffee fan there, named Van, and he and I had a very fun and casual time with Lindsay, learning about coffee, and doing the Tasting with three different “sun-dried” coffees from Ethiopia. We were also joined by Chandra, who is Counter Culture’s grocery store sales-person, and Joe, a barista at High Five, who is apparently a regular at the tastings @ Ten. The whole thing took exactly one hour and was really great! I learned stuff. I met cool people. I had great coffee. I even laughed and had fun. Lindsay made us feel comfortable with our ignorance, and educated us without talking down to us. There was no coffee-snobbery going on as far as I could tell. I’m definitely going back for more of these Tastings @ Ten, and Lindsay signed me up for a Barista class on November 12th, so I’ll report back on my progress in getting my barista chops back in order! In the meantime, Please enjoy the pictures and captions below…

What looks like a scene from The Prancing Pony (a joke just for the Tolkien fans out there!) is actually the Counter Culture education center on Broadway Ave in Asheville. Van the coffee fan is slurping some sun-dried Ethiopian brew while Lindsay Lee looks on.

Idido is a farm collective in Ethiopia. 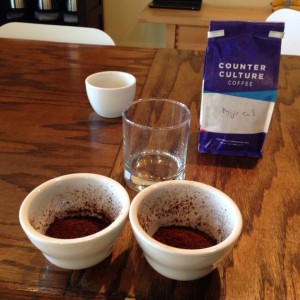 Miju Sali is a person, not a brand name.

Birhanu Zerihun (mispelled on label) is a farmer in Ethiopia.

One of the coolest things that Van the coffee fan and I learned from Lindsay is that Counter Culture works really hard to develop relationships with individual coffee farmers around the world, so that those individuals can have sustainable businesses with a stable economic and agricultural model. Apparently there is a tendency in the coffee industry to jump from farmer to farmer, chasing the trendiest crops, and screwing over the little guy along the way. Counter Culture has a representative in Ethiopia who works directly with farmers like Birhanu Zerihun, and Miju Sali to make sure that they have a way to make a living year to year, season to after season. That’s pretty fucking cool. It’s also cool that I was able to bring home a 1/2 pound of coffee, and know the name of the guy that grew it! And that he wasn’t being trampled on by Big Coffee goons just so I can have my morning joe.

You know there’s education going on when you see chalk boards, pie charts and slide shows! We learned all kinds of stuff, like the fact that all coffee came from Ethiopia originally, and the differences between the “sun-dried” and “washed” techniques of removing the coffee bean (aka seed) from the fruit (aka cherry). I’m not going to give you all the deets on everything we learned, because, you should learn it yourselves from Lindsay if you can get down to the Counter Culture education center! If not, well, I guess you’re SOL, or…  you could Google it.

Anyhoo… The tasting chart was fucking wild, and I’m not sure I’ll ever be able to discern those flavors from one another in coffee, but I’m gonna do my best to learn as much as possible!

It’s great being back in school! I love learning stuff, and I’m grateful that Counter Culture has a college right downtown! The next time you see me, I’m gonna be at least 2% smarter than the last time you saw me. About coffee anyways!