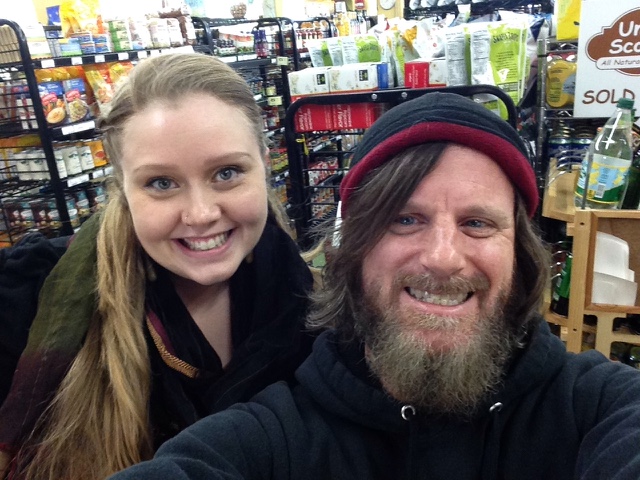 SO….  I decided I wanna shoot video.  Food related video, of myself and my friends, Dawn, my mom, other famous food fans, random motherfuckers, all out and about in Asheville and surrounds, eating the awesome food, and meeting the awesome food makers!  So, like I like to do when I wanna do something, I started doing it.

It’s kinda like the Nike motto, only way better, because it has a swear word and an apostrophe in it.

I ran my idea of shooting video about the food scene in Asheville past a few reliable people, and they all agreed that it was a good one, so I decided to start right away, raw, with no experience or script, or anything beyond an iPhone, a date with a contest winner, and my usual levels of enthusiasm and “fuck it-all-edness.”

I’m titling my series “Food Fans, Asheville” and it stars me, in typical, annoying selfie mode.

This first installment also stars the lovely and interesting Kiere Shafer, who won a FaceBook contest to have “FREE LUNCH with the  FOOD CRITIC” sponsored by The West Village Market & Deli.

Our co-stars include Tom, who gave me a ride, Adams Wood who is a fellow food fan that we met at the deli counter, and then Hyette and Thomas who both work at the deli counter.  Hyette explains what “paleo food” is, after Thomas admits that he doesn’t know “exactly what the fuck that means!”

Thomas was a great interview subject, and Kierre was also very natural in front of the camera.  Adams and Hyette were awesome too, and my friend Tom is a stone-cold stud.

You can watch the video below and then read more about the lunch and our conversation below that.

This is my first attempt at shooting a video like this, ever, so it’s kinda shaky and choppy, and runs about twice as long or longer than it needs to, but there are some funny moments, and good info, and like I said, the people in it totally rule.

Enjoy the video!  Here’s a teaser for the writing below it:

“Delving deeper into the topic, we expressed a mutual admiration for the Scandinavian people, who had gone from one of the most brutal and fearsome cultures in history to one of the most civilized and peaceful in the world today.  Kiere had obviously thought about this before, and had very interesting things to say…”

I got to the West Village Market & Deli about 15 mins early, and got myself some hot coffee (in a ceramic mug!) from the self-serve coffee area, and situated myself near the deli counter in the back, to wait for my lunch date, and fellow food fan, Kiere Shafer.  I was very much looking forward to our free lunch, on the house, which part of a promotional contest that I ran on my FaceBook page.

I’ve done “free lunch with the food critic” contests in the past, and this one was similar to others in that the entrants had to convince me to some degree that we would have a good time together at lunch.  No duds.  I ain’t eatin’ lunch with a fuckin’ dud.  Or a jerk.  Or any dick-heads.  Fuck dick-heads.

I asked the entrants to come up with“Three possible topics of conversation” that we could discuss over lunch, and they came through with some good ones, so it was a little hard to decide, but in the end I picked Kiere, as her three topics appealed to many of my personal interests:

1) The evolution of Viking culture into one of the most civilized on Earth
2) Hot dogs for every occasion!
3) How can we stop the use of (the font) Papyrus in Asheville

Yeah, man!  Vikings, evolution, festive occasions, fonts, and hot dogs!  I could talk about fonts alone for the whole lunch.  I contacted Kiere to let her know that she won, and we set up a time to meet for lunch.

She showed up right on time, we hugged (Hey, Asheville! Hug City, USA), and I think we were talking about hot dogs before she even got her coat off.  My kind of person.

After some initial chit chat, we decided to order. Kiere was all about the tempeh, which I found interesting, because she’s obviously a meat-eater (she makes a “breakfast hot dog”at home), but she said she loves the “Tempeh’s So Asheville” sandwich at WVMD, and was going to try the tempeh Reuben this time.  I like tempeh too, even though I eat the shit out of some meat.

Asheville is a town where there’s not always a hard divide between the meat-eaters and the veg crowd.  I like that.

I ordered something called the “Roast Beast,” that was roast beef, horse radish sauce, roasted red peppers, spinach, cheese, and red onions.  Hold those fucking onions, throw in on the panini press, and I’m all good to go!

My sandwich was excellent.  Very moist, and flavorful, and the bread was crispy on the outside, and still soft and fresh tasting on the inside.  I knew that the ingredients were all high-quality, because I know for a fact that the people who run WVMD give a shit about me, and you, and all of their customers, and they want to feed us high quality food.

I ate every bite of my sandwich, and Kiere seemed to be enjoying her’s too.  We were both members of the clean plate club.  Even the pickles went down.

We also tasted the soups: I got Minestrone and she got the Ginger Bisque.  Mine was great!  Very hardy and savory, the broth was not watery at all, and the flavors were well-rounded and had depth to them.  It was a tasty, comforting cup of soup.  Kiere’s ginger bisque did not impress her, which suprised me, but made more sense later, when Thomas the deli guy expressed a lack of enthusiasm for his own creation, explaining that he intentionally made it very mild, for the folks who prefer mild foods.  Thomas clearly prefers spicy food, and I had a feeling that Kiere does too, based on some of our lunch conversation.

And speaking of our conversation…

PAPYRUS – We agreed that Papyrus needs to die.  It is one of the original free fonts that came with every fucking Mac ever produced. Maybe on PCs too, I wouldn’t know.  It looks like this…

You’ve seen it.  It’s in use still to this very day.  People like it.  People in Asheville seem to like it a little more than people in other parts of the world.  Graphic designers fucking hate it.

I’ve been doing freelance graphic design for 23 years, and every time I see Papyrus, I die a small angry death inside.  “Why?  Why why why Pa-pie?”

Turns out, ya’ll; Kiere is a graphic designer too! She told me a horror story…  a nightmare really…  about a recent experience in which a client insisted on Papyrus.  Y’know that small angry death I mentioned above?  That’s just from seeing the dreaded font.  Poor Kiere was being asked to work with it. Touch it. Move it around on a screen with photos and graphics, using her brain and eyeballs to do design with it, and then sign-off on the finished product once the client gave her the thumbs-up.

I was dying angry sympathy-deaths for her, but the conversation was saved from total morbidity when she said wryly, “It wasn’t a portfolio piece,” and we had a good laugh at the very idea.  Kiere has a good sense of humor.  Another reason I was glad I picked her as the contest winner.

VIKINGS – We talked about Vikings and Viking Culture, and Kiere asked me if I watch the dramatic TV series titled Vikings.  I said no, it’s too dramatic for me, but I suggested that she check out the movie Valhalla Rising, which is maybe the best Viking Movie ever made, and she said she would!  As a side-bar, I mentioned that it has a good droney/doomy soundtrack, and she said that she could understand how that would work well with Vikings.  Yeah, Man.  Kierre is a cool chick.

Delving deeper into the topic, we expressed a mutual admiration for the Scandinavian people, who had gone from one of the most brutal and fearsome cultures in history to one of the most civilized and peaceful in the world today.  Kiere had obviously thought about this before, and had very interesting things to say, including that the Viking women were treated as equals, so an atmosphere of equality was fostered over the decades.  She added that the Vikings were known to assimilate the cultures they conquered, so we extrapolated that as more and more of the people the Vikings conquered became part of Viking society, this attitude of equality was extended outwardly to other tribes…  until eventually… world peace became a Viking tradition!  Fuck yeah.  Vikings!!!

HOT DOGS – As I said, we were talkin’ hot dogs the minute Kiere arrived at the Deli, and that particular topic was recurring.  When she reminded me that she had posted on my FaceBook page one time about her breakfast hot dog, which included scrambled eggs, and I was all, like, “Oh yeahhh!  I remember you!”  We agreed that breakfast hot dogs should be standard fare on menus all over Asheville, and across ‘Merca.  I mean, WTF, World?  Breakfast hot dog.  Duh.

I told her about my hot dog pizza recipe, which is a toaster oven treat that can’t be beat, made from naan and a butterflied, “twice cooked” dog, complete with pizza sauce, mozzarella, ketchup, and mustard.  It’s one of my all-time greatest creations.

Yeah.  We mostly talked about food, as food fans are wont to do, and we even ran into Ben from Sovereign Remedies, who was shopping for lunch.  He stopped to say hi, then politely backed away when I started foaming at the mouth about hot dogs…  or Vikings.. or fonts…  Hey, Ben!  I’ll be in to see you soon, and we’ll pick up where we left off!  Ha ha!  JK

I gave Kierre a pop-quiz essay question at the very end:

She froze, and admitted that she didn’t know much about “Jewish holidays.”

If I knew Kiere a little better I would have mercilessly made fun of her right then and there, but since I never know how my cruel sense of humor is going to go over with new friends, I informed her that Kwanzaa is an African American holiday, and we agreed that at the very least a festive African pattern could be created using ketchup, mustard, and relish.  I suggested Ethiopian bread instead of a bun, but we left it open, and I “joked” that I would be expecting her real answer soon.  “Joked.”  Kiere.  As in:  I was serious.

The whole lunch was really tasty, and fun, and I even got a nice interview with the deli people after Kiere said her goodbyes!  Thanks, Kiere!  You’re the best!

And thanks to Rosanne, Belle, Hyette, and Thomas from the West Village Market!  The food was great, and the whole thing was a blast!