Dawn and I purchased tickets to a preview of the food that will be served at Gan Shan Station, when it opens its doors (hopefully) this winter.

The preview was hosted by Metro Wines, and was a good deal, as we got 5 courses, and Dawn got 5 glasses of wine, all for about $45 dollars per person.  It would have been a much better deal if I also drank wine, but I don’t, so whatever.

Metro Wines is a nice little shop up on N. Charlotte street, right next to the Charlotte Street Grille.  Gan Shan Station is the name of the new asian fusion place that’s slated to take over the truly horrible and much hated BP Station that’s been abandoned in a terrible state of decay, detracting in a big way from that otherwise very nice little neighborhood for years.

That station has been an eyesore ever since I can remember  —  even when it was still a functioning garage  —  so we’re all very glad that it’s going to become something potentially awesome!

Here are some pictures from the evening… 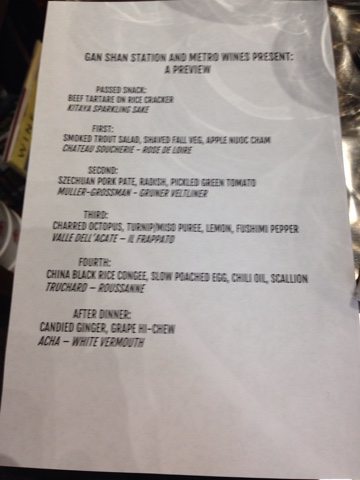 The Menu was fixed. 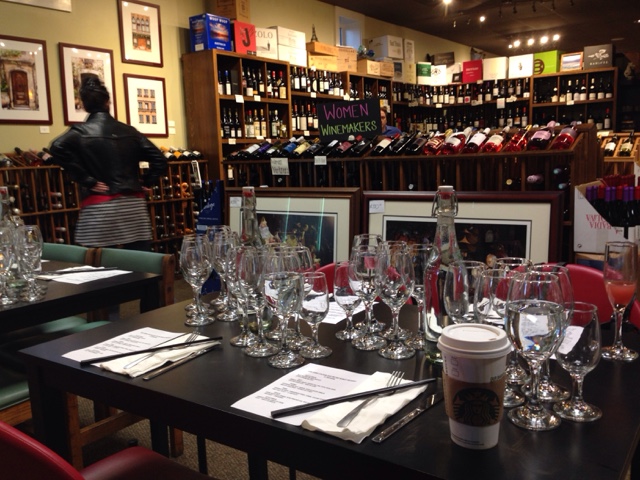 The place looked really great.  That’s dawn scoping-out the wine in the background, and that’s my Starb’s cup really classin’-up the joint in foreground.  They didn’t have coffee available that night, but they said I could bring my own, so I did. 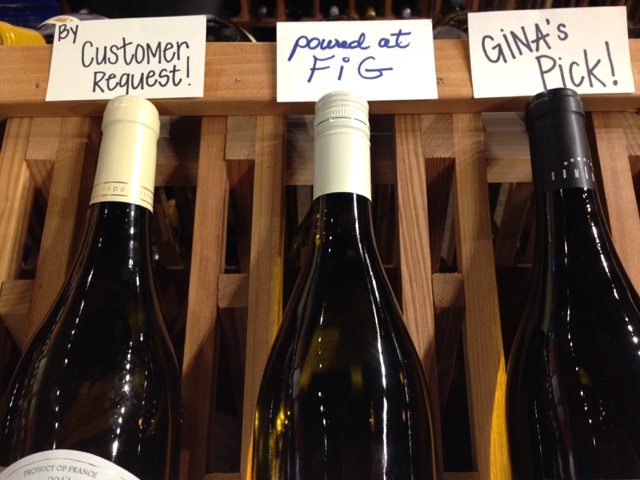 They have a lot of fun little signs all over the store that tell you who likes what, and even which local restaurants their wines are poured at. 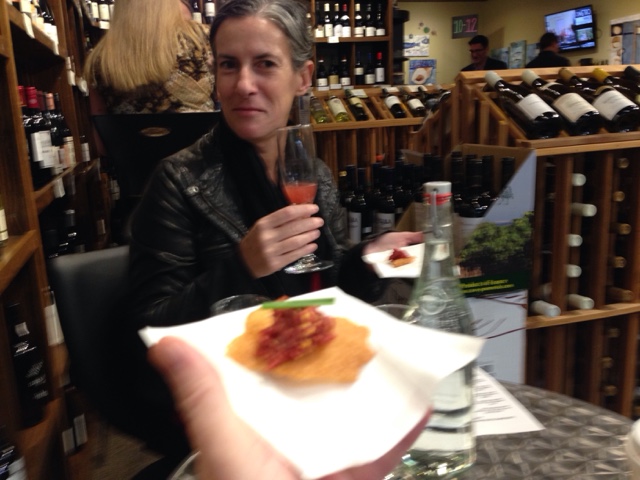 The beef tartar on a crispy rice thingy was one of the best parts of the meal.  I never thought I would like raw meat on a cracker, but this town is so full of tartar these days, that I’m really getting to like it!  Dawn said the sparkling sake was a little too sweet for her liking. 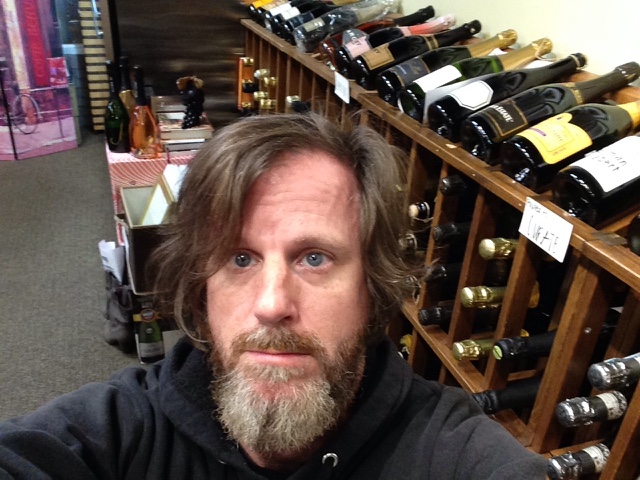 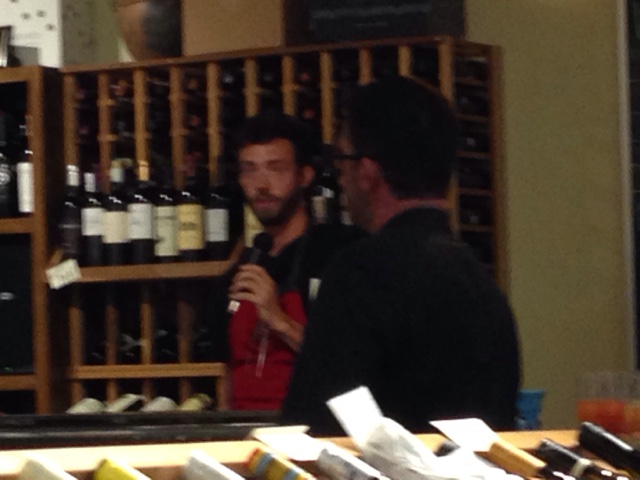 Here’s Patrick O’Cain on the mic, he’s going to be the head chef / owner at Gan Shan Station. He came over to our table and was very nice!  He grew up here in Asheville right in that same neighborhood, and seems very excited, sincere, and enthusiastic about the future!  That’s the wine guy in front of him, I forget his name, he was very nice too, and funny, and very down to Earth. 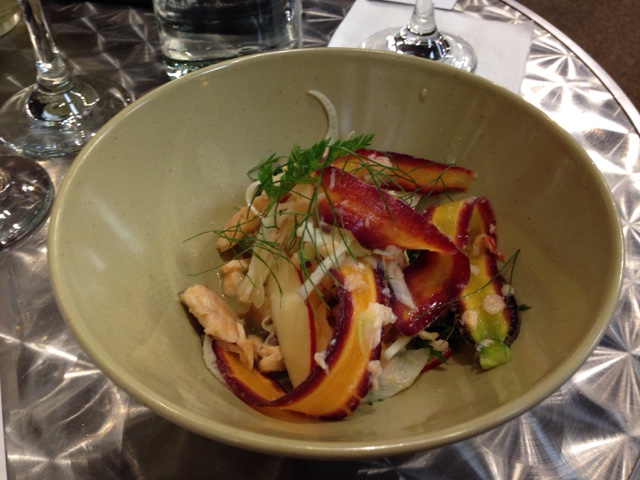 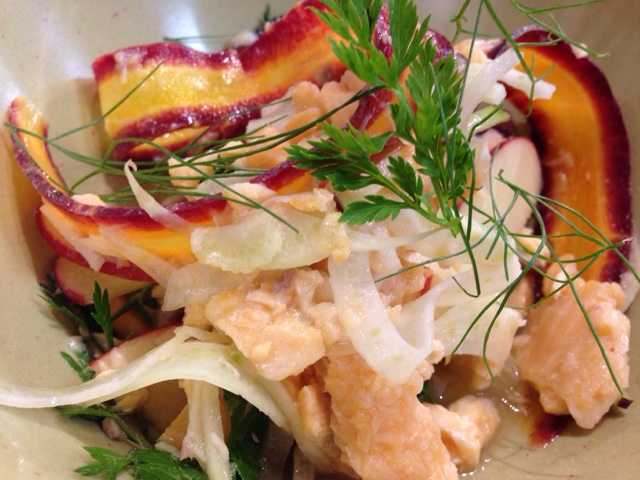 This smoked trout salad with shaved veg was very good.  Dawn said it might have been her fave of the evening.  We both agreed that they gave us too much of it, though.  It was only the 2nd course and we were already getting full!  As we attend more and more of these “tastings” and other food events, we are noticing that there is a real skill to portioning at various types of happenings.  I remember being even slightly pissed-off at one of the vendors at the burger battle for giving us a largeish burger!  Size matters. 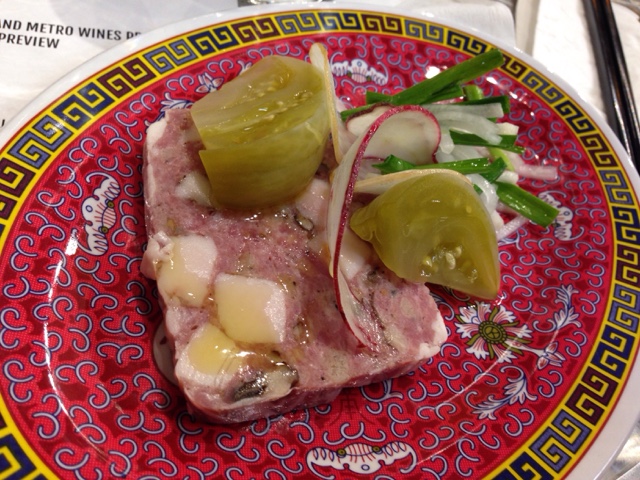 I am not the hugest fan of terrine.  I find that it has an ick factor for me, after the third or fourth bite.  I ate all of the stuff on this plate however, but more out of guilt than pure enjoyment.  I was quietly gagging on the last two bites of terrine.  That’s just me though.  And Dawn.  She’s even less of a fan of terrine than I am. 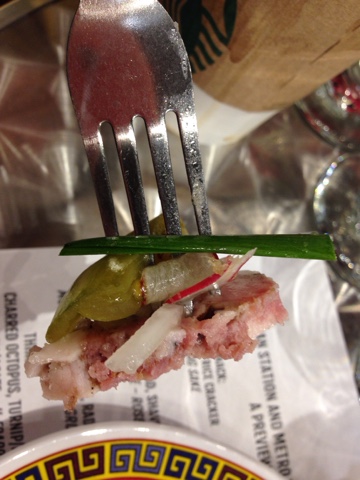 We both enjoyed the terrine more when it was mixed with all the other stuff on the plate into a “bite.” 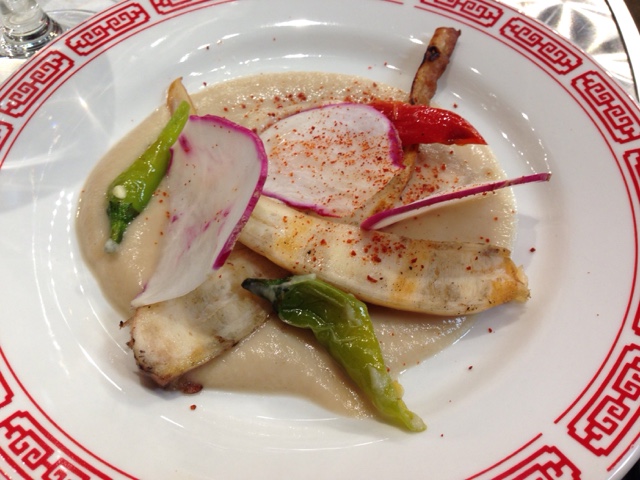 This is octopus.  It was good but the dish suffered a little bit because it wasn’t served hot, but lukewarm. That was probably due to the fact that they were working without a proper kitchen, because the event was in a wine shop, so while understandable, I think the dish would have been better had it been hot.   Dawn found the puree on the bottom unappealing, but I enjoyed it.  The peppers were mild and tasty. 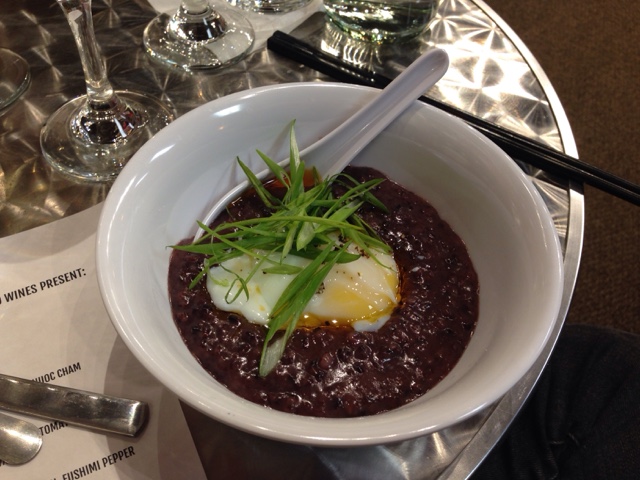 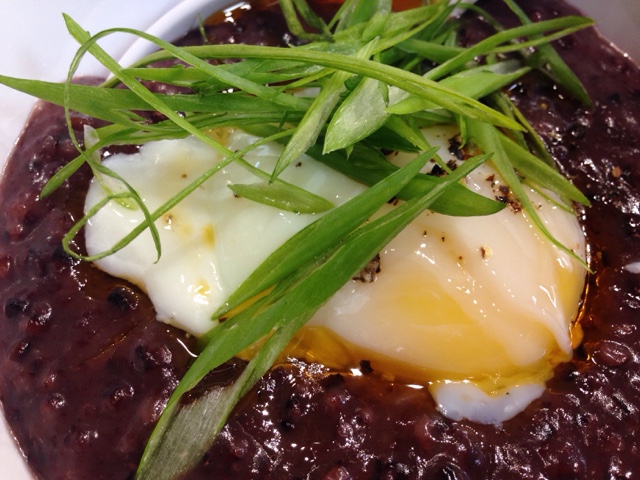 This is black rice congee with a poached egg on top.  I did not enjoy this very much at all, and found it to be completely out of place at this tasting.  The portion was way too large, and the over-all feel of the dish was very breakfasty.  The time was, maybe, 8pm by this point, we’d been eating various small plates of weird food all night, so I simply wasn’t anywhere near in the mood for a big ol’ hearty bowl o’ breakfast.

I also found this dish to be very “low brow,” which can be fine, even preferred in a different setting, but not here at the wine shop.  Congee is, essentially, and Asian version of grits, and people eat it for breakfast the same way that we eat grits down South or they eat Cream of Wheat up North.  There’s nothing exotic, or exciting to me about a bowl of Asian grits with an egg on top.

Others felt that the additional hot chili oil was too hot.  I found it to be the saving grace of the dish, which was otherwise very bland to me.

Dawn seemed to enjoy this dish more than I did.

For dessert there were two pieces of candy.  Disappointles to the maxwad.

I was pretty disappointed in general, to be honest, and while I feel as though Gan Shan Station will be a huge asset to that neighborhood and I’m very very super duper glad that it is opening up and replacing the empty rotting nightmare BP Station that has stood there for so long, I’m personally not super stoked to go eat there when it opens.

Dawn wants to go though, so I’ll be there too, keeping a positive mental attitude, and hopefully enjoying a wonderful meal.

I lived in that hood for years and hated the fuck out of this BP Station.  It made me mad.

I once did a whole photo shoot there and posted a rant against it on FaceBook.

You can see the rest of those pics and read the rantings HERE.

One thought on “GAN SHAN PREVIEW”