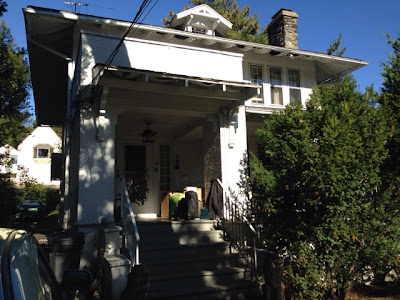 Dawn and I flew to NYC to eat some food, see the sights, and most of all, visit our beloved Aunt Sally.
Aunt Sally doesn’t live right in NYC, but in a suburb called Larchmont, and Aunt Sally isn’t really our aunt , but rather a friend, named Sally, whom I once called Aunt Sally, and have ever since.
A trip to NYC always means a trip to Aunt Sally’s house, where she graciously allows friends to stay for a day, a weekend… weeks on end, while they visit the city, check out the scene… figure out what the fuck they’re doing with their lives.
We stayed with Aunt Sally for three nights, and even though she was feeling poorly, she was a sport and joined us for one very fancy meal out and treated us to a live performance of “Pussy Panic!” by Dandy Darkly.  It was fab.
Sally’s house always has these things in it:
• Cats – Jack, and that other guy.
• Smoke – Aunt Sally smokes up a storm.
• Food – Aunt Sally loves to eat, and so do we, so we always eat with Aunt sally!  Mmm… bagels… mmm…  pasta…  mmm… chinese take out….  toffee…  popcorn…  cheese doodles…  yeah man!
• STUFFF! – Holy.  Shit.  Aunt sally loves to thrift, and her house is full of all kinds of cool stuff. 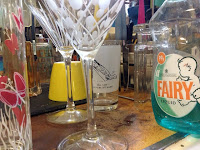 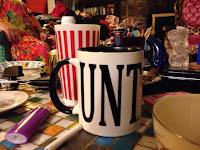 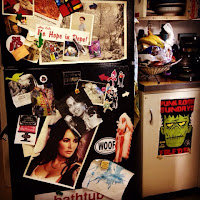 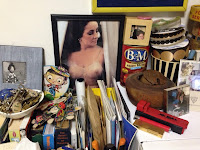 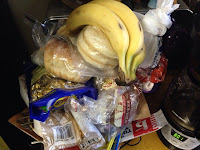 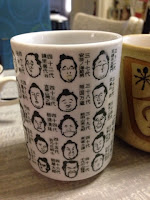 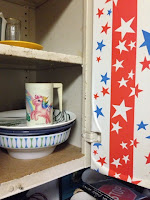 From African masks, to obscene coffee mugs, to tiny wooden sea creatures, to a heavy brass statuette of an emotionless Chairman Mao sitting in a wicker chair, Aunt Sally’s house has it all.  Plus there are piles and piles of vintage clothes, and costume jewelry, and cool purses, and matchbooks, and compacts, and cigarette cases, and old lip sticks, and perfumes, and belts, and SHOES.  Oh my god, the shoes.  Really cute shoes everywhere you look.
Aunt Sally is like the Smaug of vintage stuff, smiling atop her hoard of treasure, surrounded by smoke of her own making…  Of course, Aunt Sally isn’t evil like that dang Smaug was!  In fact, she’s super nice and really generous!  I’d own that Chairman Mao statuette right now if I only could have fit it into my suitcase.  I said I liked it, and she said, “Oh good, take it!”

Aunt Sally is one of my most fave people ever.  She loves video games, and bad movies, as well as high art and culture.  One of my favorite times with Aunt Sally was playing Wii tennis together, me working up a sweat and straining actual muscles  —  as the game’s designers intended  —  while Aunt Sally handed me my ass from her comfy chair with flicks of her wrist, a cigarette in the other hand, barely paying attention to the game and arguing with Dawn about a show at the MoMA or some other high brow shit like that.

“The play last night was dreadful, Darling.  No, I don’t blame Michael Cera, I don’t even blame the writers!  I blame myself for going.  I should have stayed at the restaurant and finished that wonderful dessert.”

That’s an uptown, New York “Darling,” not a down home Dixie “Darlin’,” which has it’s own charms, but Aunt Sally is a Northerner through and through.  When Aunt Sally calls you Darling, you feel like you’re having breakfast at Tiffany’s together, even though you’re sitting at her kitchen table, amid the clutter of chotchkies and postcards and copies of Us Weekly, eating left over noodles, and dying from 2nd hand smoke.

If there’s a down-side to Aunt Sally’s house, it is the cigarette smoke.  My parents smoked when I was a kid, and that’s exactly how I feel when I’m at Aunt Sally’s:  Like that little kid again, who doesn’t understand why the grown-ups smoke.  It’s so gross!  Plus, we all know it kills you, and I want my Aunt Sally to live forever!  But, they don’t call her Aunt Sally Death Wish for nothin’.  :(  The last time I asked her if she ever planned on quitting, she chuckled.  “No, Darling, but aren’t you sweet.”

Oh well, it’s just something I have to put up with if I wanna spend time with Aunt Sally, which I do.

She rules.
Everybody should have an Aunt Sally! 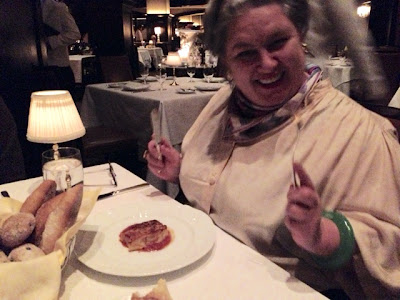 One thought on “AUNT SALLY’S HOUSE”