GETTING JAZZED FOR THE SECOND ANNUAL ASHEVILLE COFFEE EXPO!

Asheville, NC, River Arts District -The 2nd Annual Asheville Coffee Expo will be happening in the River Arts District on September 30th, 2017, and the whole coffee community is abuzz about the return of this fun, FREE, fully-caffeinated festival, which is the only one of it’s kind in the WNC area!

According to co-organizers Stu Helm (“The Food Fan”) and Angie Rainey (CoffeeCrate.co), the 2nd Asheville Coffee Expo will be a repeat of the very successful inaugural event, only bigger and better! Starting at 10am, this four-hour, indoor / outdoor celebration of coffee, and all things coffee-related will feature 30+ vendors, representing local, and regional coffee roasters, cafes, chai & tea producers, bakeries, doughnut shops, With an ever-growing local coffee scene, and increasing interest in coffee among the general public, Stu, Angie, and other organizers and participants are all looking forward the 2nd annual Asheville Coffee Expo!

What to expect: The public will be invited to browse the tables, try free samples, and shop among the vendors. Attendees will also be invited cast a ballot for the best cup of coffee among the vendors, and at the end of the event, the “Best House Cup” will be awarded to the winner! The current cup holder is Dynamite Roasting Company (Black Mountain), who will either successfully defend their trophy for another year, or be forced to hand it over to the new champs!

Inside of PennyCup Coffee‘s RAD roaster / cafe, Stu will Emcee the 2nd annual “Triple Espresso Barista Challenge” competitions, in which a panel of “celebrity” judges will rate and rank local and visiting baristas on their skills at making great latte art, the perfect cappuccino, and a “freestyle” espresso beverage of their own creation! Valuable prizes, bragging rights, pride, and respect are all on the line!

Below are the basics for now, please check back here regularly, look at our Facebook Page for updates, and mark yourself as “going,” and share our Facebook Event Page! That would rule.

WHAT:
The Asheville Coffee Expo is a celebration of coffee and all things coffee-relayed! Vendors, demos, roasters, cafes, barista competitions, prizes, coffee sack races, bakers, ice cream makers, artists, more! Family friendly. This is a FREE event, open to the public, and is for anyone and everyone who enjoys coffee

WHERE:
Ralph Street in Asheville’s River Arts District
Centered in and around the PennyCup Coffee cafe and roaster located in the RAD, near the corner of Depot and Bartlet Streets.

WHO:
Produced and organized by: Stu Helm: The Food Fan, and Angie Rainey of CoffeeCrate.co
Hosted by PennyCup Coffee Co.

THANK YOU FROM THE FIRST-EVER ASHEVILLE COFFEE EXPO!

Thank you to everyone who showed-up for the first-ever Asheville Coffee Expo on Saturday October 1st! We had perfect weather, and a great crowd of happy people having a really good time! The turn-out was awesome, the vendors were awesome, and we couldn’t have been happier with the entire day from set-up to break-down. After the event, the street was as clean as a whistle, you’d never know we were ever there! Thanks to everyone who made this happen, and thanks to Asheville and North Carolina for supporting our inaugural event!

Asheville, North Carolina has some of the best weather, nicest people, and one of fastest growing coffee scenes in the country! On the morning of October 1st, 2016 all three came together for a perfect day of celebration at the 1st-ever Asheville Coffee Festival!

The air was crisp and clear on the morning of the event, just right for drinking coffee, nibbling on fresh baked goods, and meeting like-minded folks to talk and share in a love of coffee, and life in general, in this small mountain city that is sometimes called “Foodtopia,” or “Beer City, USA,” in homage the stellar restaurant and brewing scenes that have grown so successful over the past decade or so. Ashevilel Coffee Expo organizers, Stu Helm and Angie Rainey see that the local coffee scene is the next in line to become a nationally known and respected

“Part of why the food and beer folks have been so successful is because they are united with each other as a cohesive scene,” says Helm, who is well known locally as a food writer, blogger, and radio talk show host. “I love coffee, and saw how amazing the coffee scene was becoming here in Asheville. I also noticed that there was no ‘Coffee Fest!’ There are lots beer, wine, and food feasts, but nothing for coffee, I contacted Angie, and ran the idea for the first-ever Asheville Coffee Expo past her. She was on board and we were off to the races!”

“We really had no idea how many people might show up that day!” adds Angie Rainey, who is the owner of a coffee subscription service called Coffee Crate. “The interest in the event from the vendors was immediate and we were very fortunate to have some of the best coffee, tea, chai, pastry and ice cream vendors in Asheville and North Carolina signing-up with us right away.  We made sure to have a good mix of food, coffee, and even artists form the River Arts Disctrict. Our fingers were crossed that the public would be as enthusiastic as we are about coffee, and it turns out, they are!”

An estimated 2,000 people cycled through the inaugural event — a four-hour, outdoor, marketplace-style festival on the quiet, tree-lined Ralph Street in Asheville’s RAD (River Arts District) — sampling everything from Mr. Bob’s Doughnuts, to a product called Miso Sip (it is what it sounds like!), to ice cream, and of course, lots and lots of coffee!

After an uncommonly hot Summer, the cool, Fall weather had everyone in a good mood right away. Just add caffeine and sugar, and soon people were having a great time!

• Quotes:
“I’ve never seen so many smiles on so many faces in one place!”  – Volunteer Helen Hyatt.

“I could have push-started a bulldozer by the time I left. Had a blast and look forward to next year!” – Attendee Mikey Bradley on Facebook.

“Thanks so much for putting on such a great event! We can’t wait for next year!”  – Sam Moody, Vortex Doughnuts

“What a great event – the first ever Asheville Coffee Expo. The weather was beautiful and the turn out was amazing. There was plenty of delicious coffee to go around. We’re already counting the days until next year’s event!”  – Tiffany Welsh, editor of Food Life Magazine.

• Coffee for Champions
There is a unique bond developing between the Asheville Coffee Community and the Buncombe County Special Olympics that began with their “Coffee for Champions” initiative in August of 2016, and continued with fund raising and a celebrity appearance at the Asheville Coffee Festival by the Buncombe County Special Olypics Athletes! 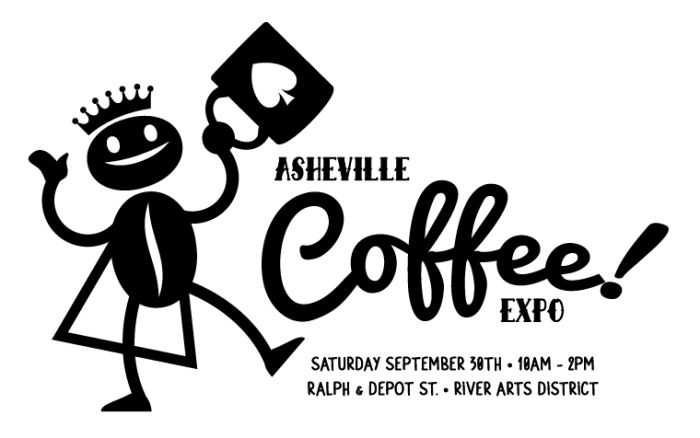