Would I Risk My Life for Breakfast?

In the midst of a world-wide Coronavirus outbreak, with America at the epicenter of the shit-storm, Western North Carolina is currently in great shape. We started social distancing weeks before Governor Roy Cooper declared a state-wide Stay-at-Home order, and shut down all non-essential businesses. Restaurants and retailers were hit hardest, with many of them closing shop completely, to “wait out” the quarantine, others switched to take-out and delivery only, and a few have morphed into small “markets,” selling local products and produce directly to their customer base.

On Friday May 8th the state entered Phase I of the plan to “re-open” North Carolina, even though we only met two of the four benchmarks recommended by the guidelines before doing so. Importantly, Phase I does not allow for dine-in service at restaurants, although Phase II, which is scheduled to begin on May 22nd, does, in limited capacity.

That’s why this is so strange…

So, with less than one week until Phase II would allow them to do so, and despite the grave public safety issues, Rise ‘n’ Shine chose to open for dine-in service prematurely, and it would appear that public backlash has prompted them to remove their own Facebook page.

I hesitate to say mean or accusatory things about Rise ‘n’ Shine’s owners, because we’re all feeling LOST, CONFUSED, AND DESPERATE, and I sympathize with them. I’ve been there for breakfast many times, and have always enjoyed it, but I’m telling you what, there just ain’t no fuckin’ way I’m sitting in that tiny space with other human beings during a global pandemic just so I can have eggs and toast. Knowm’sayin’? Eggs and toast.

I’m foregoing the greatest foods on Earth right now, and I’m gonna risk my life & the lives of others for eggs and toast?!? Naw. You crazy.

Absolutely nobody wants the restaurants to open back up more than me, but I disagree very much with doing so prematurely.

I feel bad for the employees at Rise ‘n’ Shine, and everyone else who is out of a job right now (ahem, hello, former food tour guide over here) but I just don’t think the way to help a handful of people is to put them and the entire community at greater risk during a serious global health crisis. I’m not sure why the employees were left stranded for 8 weeks, but I am sure that the same community I just mentioned would be happy to help them had they known that some of their friends from Rise ‘n’ Shine were in need.

We will get through this TOGETHER, Asheville! In the meantime, let’s not make bad decisions, but also, let’s not be cruel to each other when we do make bad decisions during these desperate times. Instead, let’s try to get at the real issue: Identifying people in need and helping them through what will undoubtedly be a long, but temporary situation.

I hope that all of the restaurants will proceed into Phase II with caution. I can tell you from talking to the workers, owners, and my fellow eaters, we all miss the restaurant scene very much, but no one is anxious to “re-open” too soon.

Thank you, Jason Sandford at Ashvegas for getting the screen shot and providing a forum for public discussion. 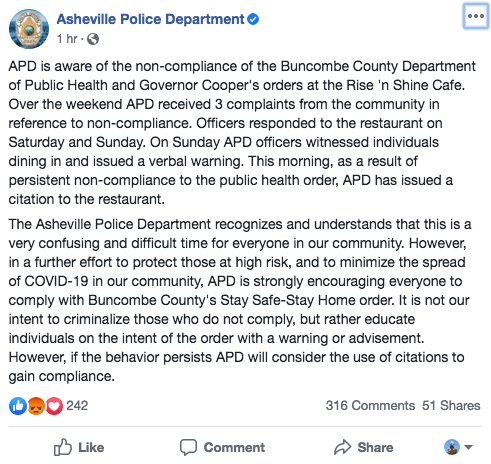 If you want to, no presh, you can tip me for my writing or for whatever reason you want, through Venmo at Stu-Helm, or through Paypal at stuhelmavl@gmail.com

One thought on “Would I Risk My Life for Breakfast?”