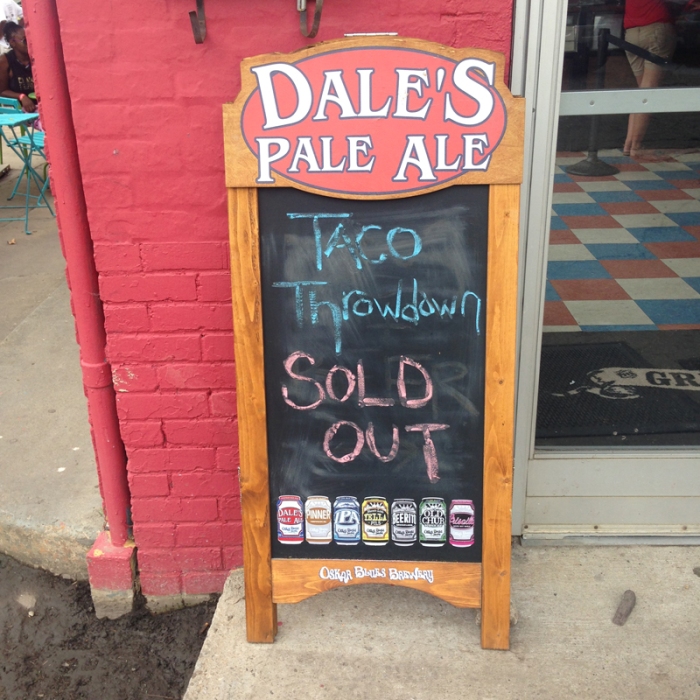 SEVEN COMPETITORS THROW DOWN FOR THE TITLE OF BEST TACO IN TOWN!

I know I know… This event happened at the The Grey Eagle over a month ago, but shut up, I’ve been busy as fuck, what with the Asheville Coffee Expo coming up, and adding a dessert tour and a 2nd Food Fans Foot Tour to the Asheville Food Tours schedule… plus I did post all the pictures and announced the winner on my Facebook page back on the day of the event, so… anyhoo… what can I possibly add to the conversation at this late date?

Well, first of all, I can not stress enough how FUCKING GOOD the winning taco was. Holy. Fuck… alucka… wuckawucka woo. I’m telling you what, Yo. I am not kidding. There was no debate at the judges’ table: The pork belly bahn mi taco from Chupacabra Latin Cafe was hands down, no debate, all five of us agreed, the best taco, because… it was fucking awesome.

A colorful display made for a taco that was a s pretty as it was tasty! – photo by Stu Helm

House cured pork belly, house pickles, chow chi, Chang aioli, & Cilantro were all on the list of ingredients provided to the judges, but you can also see in the pictures that there are what look like toasted sesame seeds, chili powder, and shredded lettuce. It was served on a regular wheat flour tortilla. “Chow chi,” is a combination of chowchow and kimchi, explained the presenter from Chupacabra. And Chang aioli is simply listed as “mild” on their menu. Both were excellent, as was the entire taco, which makes sense, since, y’know, it WON, and stuff.

What made it so great…

Pork belly in yo faaace! – photo by Stu Helm

The weak link was definitely the tortilla, which was very standard, and was prepared and presented in a very standard way. It was good enough, and didn’t detract from the taco, but it didn’t really contribute anything special to it either. That was a common theme throughout the event, and came up several times during the judges’ conversation with each other.: The tortillas were the meh-est part of most of the tacos, and it was absolutely a deficit in some cases. Which is a surprising oversight, in my opinion, as a taco is essentially made of two things: A shell and some filling. No matter what the filling is, without a shell, it ain’t a taco, and without any filling, well, the shell is just a shell. So, yeah, while all of the contenders paid special attention and care to the filling, almost none of them did anything at all out of the ordinary with the tortilla, and in some cases that very ordinariness clashed starkly with the fancy-pantsy fillings inside.

The taco pictured below, for example, which was presented by Asheville Tacos & Taps, and was fucking great, except for the dang tortilla which was so out of place, it actually kind of annoyed the shit out of the judges. Well, me and Joe Scully anyways. Yes that’s right, Chef Joe was a judge this time! FUN!!! He even wore a tie. (Square.) But, yeah, back to this taco shell dilema…

Why did the tortilla bring this whole taco down?

The tuna taco that could have been king. – photo by Stu Helm

Now, there was a little cultural confusion visa vi the pico being thrown into the mix with all those Asian and Pacific Island type of ingredients, and that bugged Joe in particular, but the true sin was the wheat flour tortilla in my opinion. I mean, as far as I can tell — I’m no expert — but it doesn’t seem like there’s a lot of bread or wheat or carb-based foods that are associated with Asian / Polynesian cuisine. I could be wrong — please don’t hate me if I am! — but I don’t typically associate dinner rolls with sushi for example, or flat bread with sashimi, which is essentially what a flour tortilla is. So, how to get around that dilemma?

As I mentioned, it ain’t a taco without a shell.

Let’s imagine this… What if… Instead of a wheat flour tortilla, the chef had used a paper thin slice of fresh jicama, a la the amazing “Caesar Salad Taco” at Nightbell? Now, yes, that is straight-up STEALING, but y’know, all is fair in love and war… and tacos, so it’s okay to steal, and THAT would have impressed the fuck out of me and Joe and all of the other judges. Of course, Joe and I would have both been, like, “Yeah, this is just like Katy Button’s Caesar Salad taco…” but that wouldn’t have left us with any negative feelings. Hell no. To the contrary, we might have both thought, “this is a really great application of her genius concept.”

Here’s the point, which is not to tell cooks and chefs what to use for a shell, but to relate the fact that the judges are — and should be — judging your tacos based on our impression of the shell as much as the filling. That might seem crazy, like, “holy fuck, Stu, we put a ton of time into the filling, and the shell is just whatever.” And that’s kinda my  point. The shell is not just whatever. It’s fully half of the equation. I’m not saying every shell for every prize-winning taco has to be special as fuck or it will fail, I’m just saying that no one blew our minds with their shell efforts, so the bar was set pretty low, so if one of the competitors had really styled us out with a killer shell that matched the killer filling, that would have absolutely given such a competitor quite an edge.

And I guess that’s what I hope I can contribute to the conversation about tacos at this late date. There is another taco competition coming up in October, so, y’know. There’s time to work on your shell game.

Judges’ table, Yo! Joe looks like he’s going to a funeral afterward.

Here are the rest of the tacos presented to the judges by the 2nd annual Let’s Taco ‘Bout It competitors, in order from top to bottom they are: Mojo Kitchen & Lounge, Salvage Station, Bartaco Biltmore, Mountain Madre Asheville, Zia Taqueria Asheville, and The Grey Eagle. 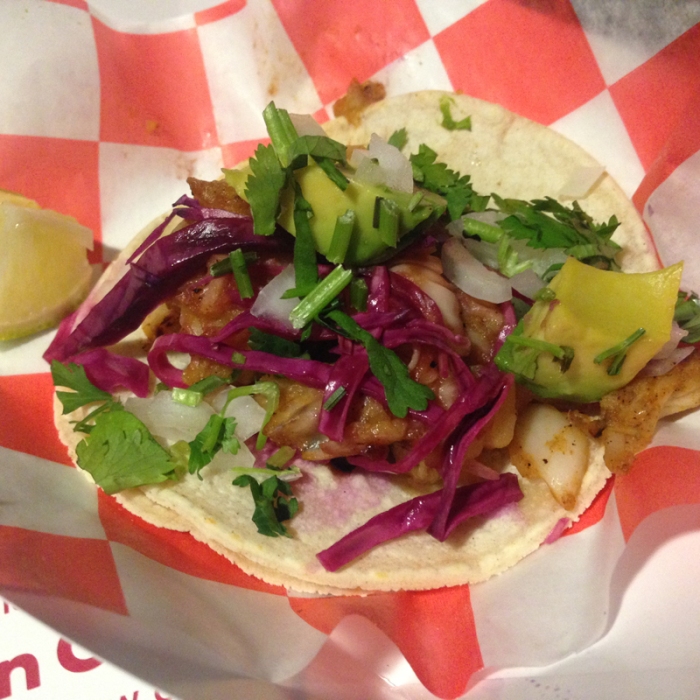 The Grey Eagle served but did not compete with this jack fruit taco.

PS – Joe really was going to a funeral afterward, which is why he was so dressed-up.